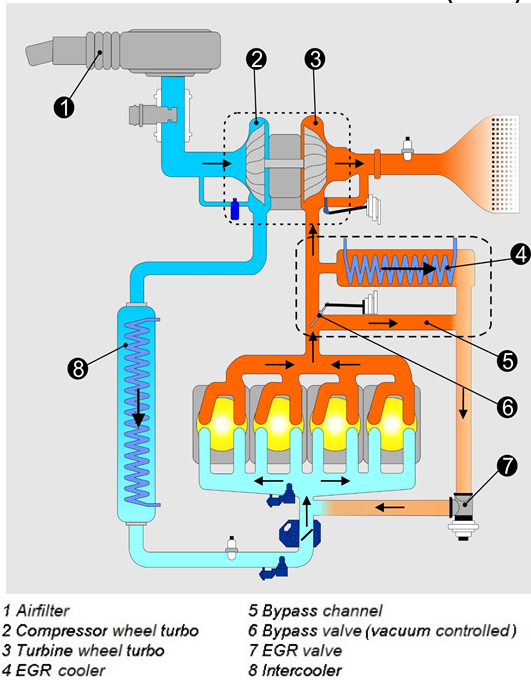 What is an EGR system?

The high temperature in the combustion chamber usually exceeds 2500 degrees Fahrenheit. Nitrogen(N2) and oxygen(O2) combine to form nitrogen oxides(NOx). NOx is a harmful gas that reacts with hydrocarbons in the atmosphere to generate ozone(O3) under sunlight.

One of the auxiliary advantages of using the EGR system is that it allows a shorter time to reduce shocks.

In a serial engine, the exhaust passage is connected to the intake pipe through an external pipe. The V-type engine has casting channels in the exhaust and suction mechanisms.

a. Vacuum pump and measure

3 Spool design – There are 3 small holes, middle holes and large holes, and each spool controls the opening and closing of this hole. In addition to being completely closed, seven different flow rates are generated.

Most OBDII systems have a feedback circuit for the actual EGR valve position.

All OBDII systems perform diagnostic tests to ensure that the EGR valve operates correctly. The three overview methods/sensors all use local dynamic changes, such as the oxygen level or pressure to send the PCM the EGR valve normal function signal.

When the MAP sensor EGR valve is opened, the exhaust gas will flow to the intake hose. This will change the vacuum level of the intake pipe and the fuel adjustment for charging. AP sensor “; notification”; these changes are acceptable. If they fall to the pre calculated level, “0” will be given; thumbs up “; eGR function.

There may be some problems with the EGR system. If the EGR valve is in the closed position or the exhaust flow is limited, the EGR system will not work properly, the NOx level will rise and may explode. The EGR valve is stuck in the open position. In addition to the engine output problem, rough idling and overspeed will occur at low speed.

The function of EGR system can be verified through the combination of vacuum pump and pressure gauge. California smoke inspection project requires EGR function test on TSI – 1995 and previous vehicles. There are basically two items to consider: a) whether the EGR valve can maintain vacuum; b) whether the engine is closed when vacuum is applied. If the vehicle cannot maintain vacuum – there is a problem with the EGR valve or EGR channel. If the engine doesn’t stop, there is a problem with the exhaust passage.

c) Various links mentioned in the body of the article